Out of space in 5D

Any way, in attempting to correct the problem I’ve looked to replace drives, but at this capacity it’s getting pretty darn expensive.

Maybe I’ll put in a 6 and two 4s and stick my Time Machine on there, though really the I/O bandwidth of Time Machine is pretty small unless you’re doing a restore. And considering how often Time Machine corrupts itself, it might not be advantageous to put it in a protected storage set.

But boy are these guys huge.

Thanks in advance for any advise or insights.

I see your problem. The yellow capacity warning level comes from the old storage capacity ratios. It’s always been 80/20. If you go below 20 percent available space you start to compromise access times. It’s still prevalent on many current raid storage systems because raid hasn’t changed. Unless a manufacturer has specifically addressed this issue (and you pay a premium for) with more sophisticated algorithms/ram buffering and other tricks this is all you get. Drobo is at 18 percent so better than the 20 percent set as the industry standard (you are at 14.95 percent).
I would also stay away from the drives you are using as I’ve got a stack of them in the dead pile. WD (HGST) and Toshiba seem to hold up much better. Pricing is dropping every week so think 14 or 16 terabyte. Not 12. Don’t invest in an incremental (percent wise) in drive capacity b/c 6 months from now you’ll be looking at the “yellow space warning” again. 2TB is nothing in the storage world now.
good luck

Actually, Drobo’s yellow warning is 15% (which is why I started getting the error).

About Ironwolfs - I’ve been sticking with them because I don’t recall ever having a failure; I had tried HGST because I’d heard good things about them but did have a failure. I do remember earlier Seagates croaking way too often though.

I did see drive reliability stats from BackBlaze (who uses a crapton of drives), and may have a more down-to-earth criteria for disk purchases (dependability vs. cost). Here’s a link: https://www.backblaze.com/blog/hard-drive-stats-q2-2019/.

Let’s see … yeah, it looks like the 10 TB Ironwolfs were okay at a .56% failure rate, but the 12s spiked up to 1.89%. As always, it’s a balancing act between dependability and cost. Unfortunately, long term testing results on the latest drives are scarce because they are so new, and all you really get are sporadic reports from people who’ve tried them and have no problems so far (which is obviously not long term empirical data).

If you look at the 12TB HGST drives, they have a .37% or 1.19% failure rate depending on model, and the Toshiba 14TB sits around .78%. Unfortunately (as proved by the Ironwolf stats), you can’t take that failure rate and project it forward for the next higher capacity drive - each is different reflecting different engineering choices.

So … what’s been working well for you? You mention 14 and 16TB drives: which model numbers do you have? Considering that when I expand into that storage range, I’ll need two to see any advantage - the first will get eaten up for parity - where did you get them and how expensive are they and what’s your luck been with them?

I went with the 8D, and am currently in a recovery state - I put in my five 10s, and added a cheapo 6 (non-NAS), and a 4 and 3 TB Red which gets me up to 13 additional TB of storage. I had to delete the old volume to increase its capacity from 64 to 128 TB, and am slooowwwly restoring from a Synology DS 1817+ in the family room, connected to ethernet ports on a Netgear Orbi router and satellite using the wireless backhaul between the main router and satellite. I’m only getting 24-25 MB/sec throughput and thought about bringing the Synology up to my office to get better throughput by plugging in the gig ethernet, but my long years in enterprise infrastructure has taught me that in general moving storage units (especially with old drives) is generally a bad idea.

Of course, enterprise storage units were generally EMC or IBM, but I did have experience with an occasional Quantum dedup box, and while the scale and cost were different, when you deal with rotating drives the lessons are basically the same.

Here’s AnandTech’s recommendations: AnandTech’s HDD Recomendations - as you can see, the highest rated 16 and 14 TB NAS drives are (which really are RAID cabinet drives) are Ironwolf and Exos - both Seagate products.

I’ve searched for Toshiba 16 TB drives and they’re not out yet; 14 TB Ultrastar OEM drives are on Amazon but are not warranted by WD, but by Platinum Micro? (according to a commenter) - but does that only apply when purchased from Platinum Micro?

I tried to search the WD site and saw them bragging about being the first to 14 TB but the software stack had to be altered to allow for drives which allowed for sequential writes only?

Being on the bleeding edge (capacity-wise) is not as easy as it once was.

Well, it looks like I’m the only one posting to this thread, so I’ll continue my saga in case anyone finds this topic to be of interest

I finally caved in, and after numerous mishaps I moved the Synology upstairs into my office and hooked it up to one of the Orbi Satellite’s ethernet ports and … whango … throughput went up from around 27 mb/sec to 115 mb/sec. The limiting factor seems to be the gigabit ethernet speed - so much for the Orbi’s alleged 1.3 gbps backhaul. This brings my restore time down from weeks to days, and I’m hoping the increase of filesystem capacity from 64 TB to 128 TB doesn’t increase the cluster size too much so I won’t have to expand too intensely into the extra 3 drive bays.

My next disk purchase is going to be a 14 TB drive (probably an Ironwolf as they are NAS drives and have failure/recovery modes more in keeping with a RAID array), but that’ll have to wait until I have a few extra dinero after the 8D purchase. It’ll replace the 3TB Red drive and it will become the new parity drive, freeing up the old 10 TB parity drive drive to be used for data, and should yield an extra 7 TB of capacity.

I guess there aren’t many 8D users out there - or if there are they aren’t participating here - but so far I’m pretty happy with the unit though it did arrive in pretty dreadful condition from Amazon. (The outer box looked like it had been drop kicked, and the inner Drobo box was in much better condition though it was already sliced open and one of the corners was dented. There was no packing material separating the outer and Drobo boxes, so the Drobo box within was free to move without restraint. The Drobo seems to have survived without trauma, so the UPS guy was correct - just another example of Amazon brain-dead packing/shipping.)

It came with a 20 gbps cable which I promptly replaced with a 40 gbps cable, no so much because I expected the Drobo with eight rotational drives to need it, but simply to insure that anything I may someday install downstream would not be crippled.

Well, continuing the saga of the 8D:

Restored the dataset to the new 128 TB HFS+ file system and added a 512 GB cache drive, and the cheap 6 TB non-NAS drive I’d used has thus far had two glitch events, being powered down, powered up, and gone through (fairly rapid) rebuild, making me believe that there is a more rapid reverification being done rather than going through a complete relayout. 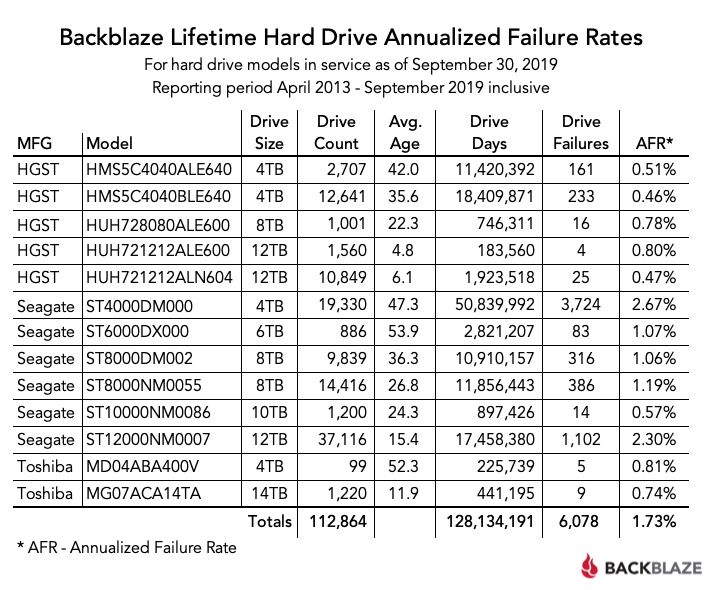 Looking on Amazon, though I wasn’t able to find the MG07ACA14TA (with a 0.74% failure rate), though I did find a MG07ACA14TE which is a 14 TB Toshiba which I presume is a close cousin for $409.95 which seems to be a good bargain. The only difference I could find between the two is the 14TA uses fixed block size of 4K whereas the 14TE can use a (emulated) block size between 512 and 4K.

Replacing the 6 TB with this drive should force it to be the new parity drive (since it will become the largest drive in the dataset), so I expect that this will increase capacity by about 4 TB allowing a 10 TB drive to replace the 6 TB as a data drive.

This, of course, sets the stage for replacement of a 3 TB RED with a 14 TB for an increased capacity of 11 TB in the dataset bringing me to the point where increasing the capacity of the file system from 64 TB to 128 TB has finally paid off.

As my current capacity for the dataset is 47.04 TB (obviously metered with 2^40 terabytes vs. 10^12) is currently still 34% free, I’m in no hurry outside of wanting the problematic 6 TB drive out of the mix.

Well, replaced the 6 TB with a Toshiba 14 TB MG07ACA14TE from Amazon - quite cheap at $389.95 - and it’s gone through data protection but is quite noisy. Interestingly, Drobo reports it as a MG07ACA1SATA which is more generic model excluding the block size differences between the 14TA and 14TE.

Not quite sure what it’s doing, but there seems to be quite a lot of activity after completion of data protection.

Tried to upload a sound file, but apparently the forums only allow graphic file formats.

Lots of seek activity resulting in something like bursts of a 10-20hz irregular hum - whatever it is, it’s pretty loud, and I’m hoping this is not a permanent condition.

Just checked and the 10TB Ironwolf in bay 0 is showing a warning status, probably from a power cycle which took place on 10/21 (at least I think it was a power cycle). Makes me wonder if the 6 TB drive was really in trouble, or if it was just a timing issue coming out of a power cycle.

Thanks for posting your process and findings. I found it useful in my HDD selections for a 5D upgrade. Seems Toshiba and HGST for the larger sized HDDs are preferred.

Glad someone found it useful

Just interested - has the disk activity quietened down, or does it remain constant?