When starting up my Drobo 5C it goes through only a portion of the reboot light show and then stops every time with the single center blue light lit, and then sits there in perpetuity. (as shown in the attached video) 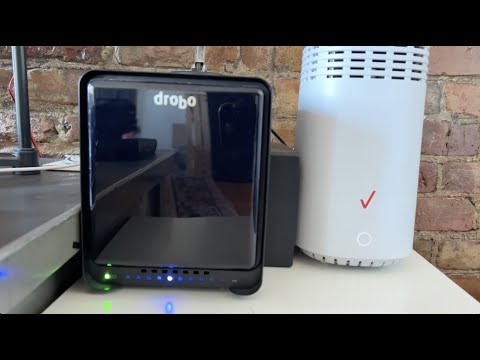 If no, try a substitute PSU & / or a pinhole reset with the spare drives in…
If that all fails, time to contact support.

If yes, it’s time to either investigate the drives in it, or contact support.

It does the same exact thing with NO drives in it. And while I have you…what is going on with DROBO as a company. Every single product is sold out.

Every product has been sold out for a while, I think they have some supply problems, chip shortages being what they are with the pandemic. They don’t have the clout the big graphics card makers have… & you try getting a current model graphics card… Just saying.

Well there’s the pinhole reset to try… even with no drives & I’m not kidding about trying a substitute PSU (power brick) either, it’s literally amazing how often that cures mystery issues.

Just don’t try the reset with your drive pack in… if it works it clears everything.

I actually have a new PSU arriving tomorrow. Really hoping that does the trick…

Are you saying I can do a pinhole reset with all the drives out? And if that somehow allows it to mount, simply putting my drives back in will return it to it’s previous state?

I’m not saying doing a pinhole reset with the drives out will work for sure, & if it were me I’d be doing it with a spare drive or two…
If it finishes booting with no drives & shows in dashboard, then it has to be worth trying shutting it down & trying to boot again with the drives in.

Point is it’s something harmless you can try for free. I’d wait on the new PSU first though if it’s that close to arrival.

You have been super helpful man. Thanks so much for taking the time.

What was the outcome of your new PSU? I have the same issue, Drobo support is no help.