DROBO; PLEASE TALK TO US! Any updates on DROBO's future?

I have inquired about ANY update of productivity & still NO RESPONSE to my last email to the entire DROBO TEAM! See below for email submitted last week.

"Are there any encouraging updates of Drobo 5D3’s or any other Drobo products coming ONLINE SOON?

I might have to go to a different system of back-ups and I simply don’t want to because I love DROBO PRODUCTS!

Does DROBO HAVE A FUTURE?

Does DROBO HAVE A NOW?

Look forward to a response that will keep us REMAIN hopeful for Drobo’s return to the big stage.

I’m in the same boat as you. I’ve begun making sure any replacement drives are all the same brand/model/capacity in case I need to switch to another firm and traditional RAID. I would much prefer to update my 5D Drobos with 8s or similar.

This is a response from DROBO Tech support responded back from a concerned customer (me).

I will see if we can get someone to update the community forums. I hope you can also let everyone know that the Support team is here and responding to questions and concerns.

I’ve noticed that the list of Drobo products keeps getting smaller. The link to the 8D on the main page now returns a 404 error.

My feeling is Drobo is dead, other than tech support. I’ve gotten pretty quick responses anytime I have opened a case, even just a few weeks ago. As for anything current or new, I’m not holding my breath. Right now I’m seriously considering Pegasus32s from Promise Technology.

I considered Pegasus32 as well but I didn’t like their tech support. I asked a few complicated questions and they took a while to answer and they were not 100% right. I went with OWC because products are good and tech support was fantastic.

Thank you for your interest in the following item:

You are receiving this message because you asked to be notified when this item becomes available. We regret to inform you that this item has unfortunately been discontinued. Please check back on our website for similar or possible replacement items.

We apologize for this inconvenience and appreciate your understanding. 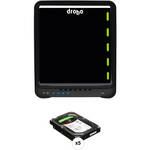 I’m still considering an OWC solution. I just am concerned about the stability of Software RAID.

@obustamante I moved from the US to Germany. At the start of the year, there were five devices shown on the EU store page, then it went down to three, and now it is just two.

My suspicion is that Drobo is effectively no more and that there is still a tech and product support team to honor the existing support contracts. But that’s just a guess because we don’t really hear anything from the company or its parent.

I just am concerned about the stability of Software RAID.

I wouldn’t be concerned by “Software RAID” as such, it’s a mature & stable thing which has more users than Drobo’s “Beyond RAID” solution does. Most of consumer & pro-sumer RAID storage solutions out there use software raid of one sort or another behind the scenes, usually Linux based.

@cyber_beardy Thanks for that input. I’m more than happy to give OWC my money. I’ve never really had problems with anything other than the first iteration of their Thunderbolt dock.

@Akeron So I just ordered an empty OWC Flex 1U4 Rack mount enclosure. We’ll see how it goes.
@Akeron @cyber_beardy - Thanks for the info!

Nice! what kind of drives did you get? I am also running Carbon Copy Cloner to make sure all data is mirrored automatically every night to the old drobo until it dies. You thinking Raid5 or 0 and backup somewhere else?

I have 5 Hitachi Enterprise 10 TB hds.
I use CCC to mirror to a Samsung SSD.
I was going to use the Drobo for Time Machine.
I will go with RAID 5 most likely.

Time is a great teacher; unfortunately, it kills all its pupils

From my view and correspondence with Drobo and BH Photo, it appears that Drobo is folding. I couldn’t wait any longer and invested in the OWC ThunderBay 4 and very pleased with it. So far no issues or hiccups from the hardware or software (SOFT RAID). The only thing that hurts is that DROBO had the simplicity factor. The robotic software-hardware configuration was a dream come true. It’s unfortunate that my loyalty to Drobo had been tested to no end and had to jump somewhere else. I am deeply saddened with this but Drobo didn’t have any other option than to leave due to lack of communication and support to new purchases.

So twenty years ago I was a Solaris Sys Admin and managed multiple DiskSuite RAID devices. I liked Drobo because you could mix drive sizes and not lose capacity (or not so much as traditional RAID). I had hoped to reduce two Drobo 5D devices down to one 8D. It’s a shame because I really liked Drobo and some of their latest products showed a lot of promise.

I’m trying to understand why Corona’s supply chain and chip shortages are not impacting other drive and enclosure manufacturers. StorCentric Nexan devices appear to be being updated and released. In fact, their latest press release is June 1, 2022, whereas the last message from Drobo’s CEO was Mar 18, 2020. So it may be that Drobo’s parent company has written them off.

Limitations: it only seems to allow disks up to 16 TB, and it’s a NAS (though you can get a 10gb ethernet card for it).

If I really had to, I use my current 8D disk set and move it to the latest iteration of Synology 8 bay and move disks to that unit and reformat, probably starting with a couple of 4 TB drives and working up to the full set from my 8D (restoring data when complete from my DS1817+). Thankfully I only have on 18 TB drive in my 8D which probably couldn’t make the trip.

Truthfully, I’m not strictly certain about the 16 TB limit, though Synology’s qualified disk lists no disk with a capacity higher than 16 TB.

I received my OWC enclosure today. I installed four Toshiba NAS 10TB HDs and initialized them (HFS+) and am set at RAID 5. I’m copying a 3 TB folder from my Drobo 5D over to it and the estimated time has gone from 2 hours to 14 days (and still climbing)? Everything is connected to a Mac Studio via Thunderbolt. I’m hoping this is a miscalculation, otherwise, it will take several months to move my data over.

Have a play with the numbers here:
RAID 5 and Uncorrectable Read Errors (raid-failure.com)
you’ll find the chances of rebuilding a RAID 5 array failing owing to unrecoverabe read errors & leaving you with lost data are uncomfortably high…

@cyber_beardy Thanks for that. I will look into it further. Right now, I’m completely unhappy with the OWC solution. Two hours and forty-five minutes to copy a 27 GB folder?! It has taken over 10 hours to copy a 3 TB folder. This is what I was afraid of dealing with software RAID rather than a dedicated controller.
I chatted with OWC support and they have sent me a suggestion involving changing the security settings in firmware on the Mac Studio, but I think I have already done that - in order to get the Drobo to work.
I backed up 7.68 TB from a Thunderbolt 3 Drobo to an older Thunderbolt 2 Drobo in less than a day. So far, this drive will take weeks. So if I can’t coax some speed out of it, it will be going back to OWC.

Strange, was quicker for me. How’s your speed tests? my OWC is way faster than the drobo. RAID10 with 8tb HDs

May well be a moot point. I started copying data off the Drobo again after connecting the OWC Flex 1U4 to another port and left. I came into a stream of “Disk not ejected properly” All Drobo bay lights were red. Drobo doesn’t react to the power button and Drobo Dashboard doesn’t see it. I pulled the power and then it reconnected briefly, then all bays go yellow. It seems like it keeps going through a boot sequence (blue lights moving along the bottom, then all of, then starting again).

So it seems I didn’t upgrade fast enough and now all that data may not be recoverable from those drives. The important stuff is backed up elsewhere.

The speed test is posted below. Not sure how these numbers compare with what is expected.

Here is a speed test against a Samsung T5 USB C SSD. So A USB C drive is that much faster?